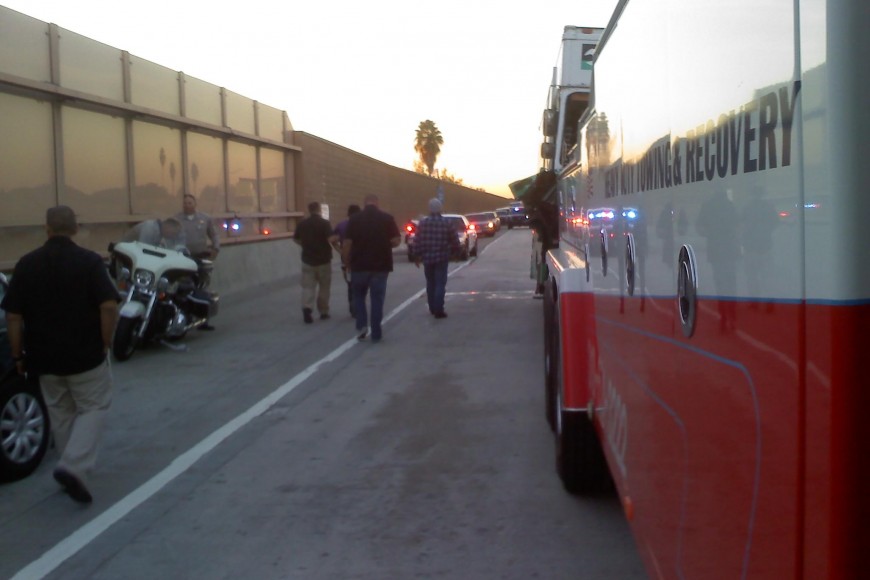 Booked on Attempted Murder and Assault with a Deadly Weapon.

Here I was exactly 6 months ago, traveling southbound on the 405 freeway in Long Beach, California, at 1:15PM in the afternoon on the 18th of November last year, it was a warm and sunny. My dog, “Curly”, and I, were traveling in the slow lane in my Stahlwille Tools / German Tool Truck. The traffic was medium, with lots of room on the Freeway for everybody. I sit in an elevated seat and can see far ahead and I always watch way ahead, watching for changes in the flow of traffic in front of me. 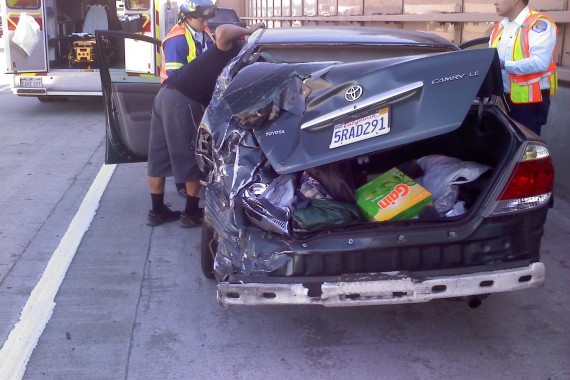 WHOA NELLY, I was on the brakes, slowing down, and then the car right in front of me stopped suddenly, right there on the freeway. The driver (which turned out to be Latino in her mid 20’s), had stomped on the brake really hard, because I noticed the back of her Toyota Camry sticking up in the air. I glanced to my left to check for side traffic, and seeing none, cranked the wheel hard left to avoid hitting the back of the Toyota. It wasn’t possible for me to miss hitting it, because as I jerked the wheel to the left, the tool truck leaned to the right, and I hit their car in the back, on the left side of her trunk. Her car was totaled. Slamming on the brakes slowed me down to about 40 mph when I hit her with the right front bumper of my truck, and the energy of the collision, added to the re-coil of the truck from right to left, and my truck turned over onto its’ left side. Sitting in my driver seat, the road surface was now just 6 inches away from my left shoulder, and I watched as we slid along the freeway until the truck came to a stop. It was really noisy as we slid, and my poor Curly got scared and she jumped off her custom-made seat next to me, in a futile attempt to get away from the noise. 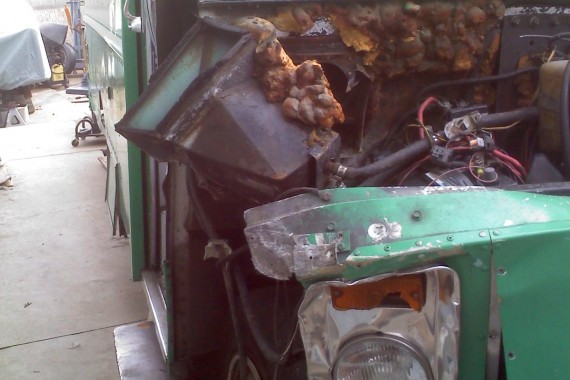 As soon as I came to a stop, there were some men standing in front of me, looking thru the windshield. The smell of gasoline was strong, and I immediately said out loud, ” I’ve survived the crash, and now I am going to die in a gas fire!”. The men then shouted at me and I came back to reality really quick. They asked where the door was so they could help me get out, and I pointed up to the side door, which was now on the top of the vehicle pointing to the sky. They climbed up onto the truck, and forced the sliding door open, just enough to help me climb up and out. One of them asked if there were any other people inside the truck, and I responded that my American Eskimo dog was still in there. I looked down, into the truck, and couldn’t see her anywhere. I thought I had “lost” her, but then after calling for her again, she came up thru a large pile of catalogs and tools, tail wagging! It was too far to reach down to get her, so one of the men went in after her. I sure was grateful that we got out, together, and the truck didn’t catch fire. (I had the presence of mind to turn the ignition key “off”, when the truck stopped sliding). 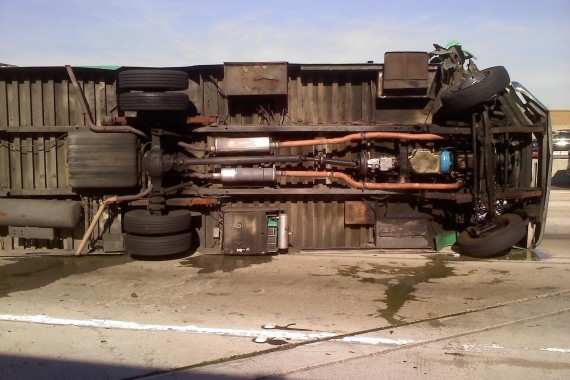 As I walked to the side of the road, I offered my thanks to all who helped us to get clear of the accident. “Angels” were watching over us that day, and I firmly believe in miracles. I then got interviewed by the CHP Motor Officer, and told him what happened. As far as I knew, I was guilty of hitting another car in the back, and this accident was my problem. During this first interview, the Officer stopped talking to me and went over to his motorcycle and made a call. I wasn’t privy to what was said, but I thought it odd that he would stop interviewing me in the middle of my sentence. He came back over and finished the interview. I stood there, holding my dog in my arms. After about 45 minutes, 2 carloads of people came walking up the side of the freeway. They were dressed in civilian clothes, and each of them began reaching into their shirts and pulled badges out that were on lanyards around their necks. I was then interviewed by most of them. I learned that they were from the State of California Insurance Commission Fraud Division and the State of California Department of Justice. Upon learning that one of them was a Los Angele Assistant DA, I began to think that they were there investigating me for insurance fraud! At the same time, an ambulance came to take one of the people who was in the Toyota to the hospital, and a fire truck came to make sure no fires could start with the truck on its’ side. 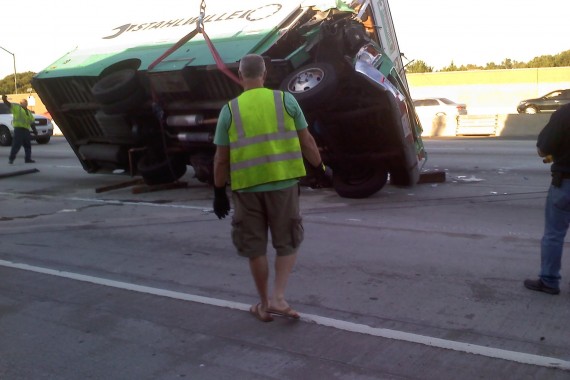 ABOUT 3 HOURS LATER, the lead investigator came over to me and told me to turn around. At this time, I thought that I was being arrested! Not so! This woman pointed over to the rear of the Toyota, and to my surprise, the two Hispanic males who were passenger’s in the Toyota, were being handcuffed and then “perp-walked” down the freeway to a Police car. I turned back to her, and told her that I was confused. She then told me to turn around again, and she pointed up to the front of the Toyota, and some female Police officers were hand-cuffing the woman who was the driver. After I watched them walk her to another Police car, I turned back to the Insurance Commission Investigator, and told her that I was really confused. She then told me that this collision was NOT MY FAULT. 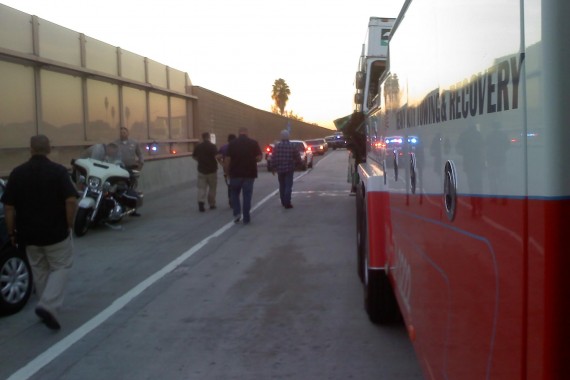 OFF TO JAIL HE GOES!

I have since learned that these three were booked for attempted murder-“assault with a deadly weapon”. Bail was set at $1 Million for each of them! I also learned that when I told the Officer what happened, it triggered the investigation, because the CHP Officer had been trained to recognize a “staged collision”. Nobody had gone to the hospital in the ambulance! It was not an accident; it was done on purpose, for insurance fraud. No doubt, the driver is going to see prison time… You see, the 2 lead cars in the scam didn’t stick around, they just drove away from the scene. Those first 2 cars are used to establish the pretense of braking, to avoid whatever might be in front of them, and when all 3 cars are in position, they all put the brake lights on–“blink, blink, blink” with the rear car just stopping suddenly.

The gangs that are involved in the set-up of this fraud, almost always pick a commercial truck to be the “target”, because they have Doctors and Lawyers who generate tons of cash in the weeks and years following the accident. I was out of work for 4 months, but am now back to work, serving my customers in a newer tool truck. Thankfully, I had good insurance to help me buy another truck and get back on the road. Curly had no injuries, and all I had were some bruises. No broken bones or cuts!!!

Enjoy the new truck cruising around the greater LA-OC area! 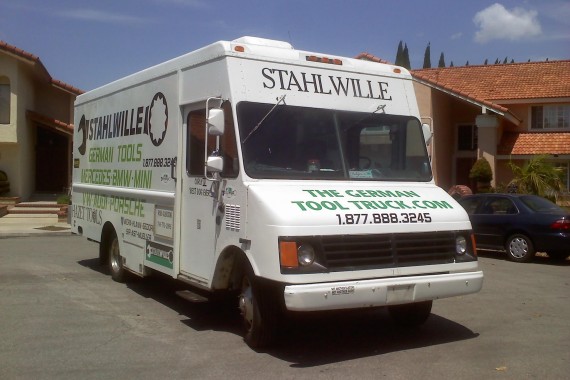 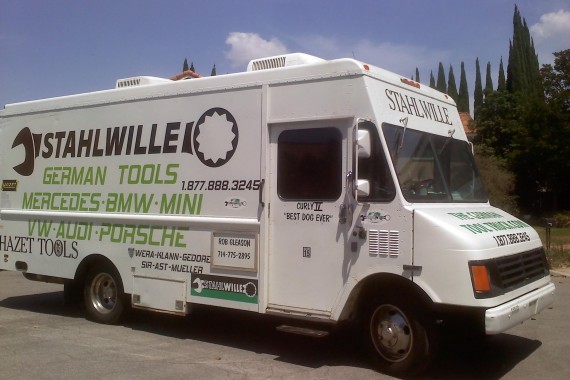 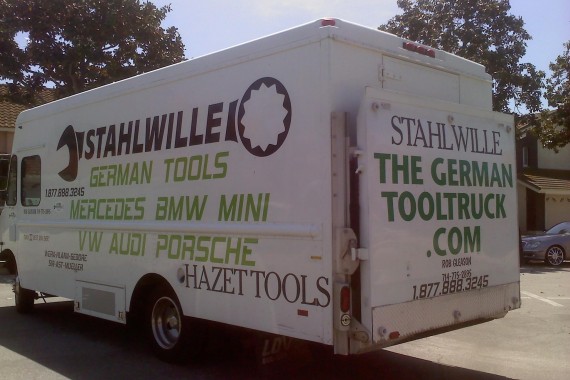 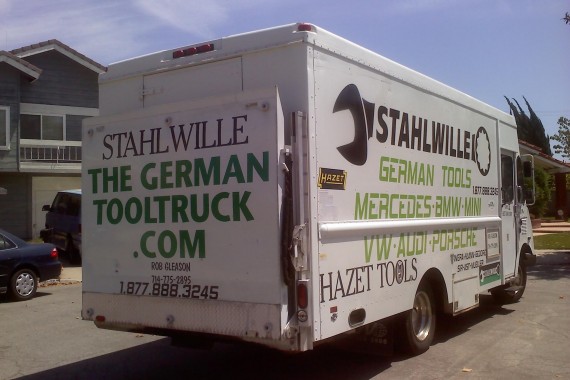 If you would like help with your professional tool needs call Us now at (877)888-3245 for an immediate response.